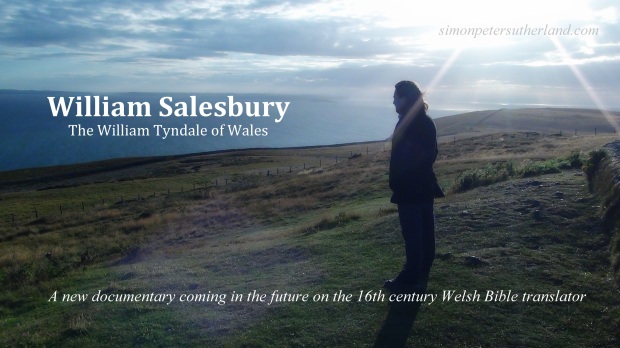 Over the past two – three years, I have been sporadically presenting and producing a documentary on Welsh Bible translator William Salesbury.

Salesbury was born c 1520 in Llansannan, Wales. He was educated at Llanrwst and Oxford and spent time in London where he became involved with the printing press. However, during the reign of Mary Tudor (1553-1558) he returned to Wales and went into hiding. Upon the accession of Elizabeth 1 Salesbury appealed to Parliament to translate and publish the New Testament. He was granted his request and he became the first person to translate the New Testament into the language of Welsh.

Salesbury was a mysterious character, who suffered for the faith and although many aspects of his life remain unknown, it is the legacy of the man which is arguably of the greatest interest. From my perspective, researching ancient Welsh, Latin and English Bibles is always a joy, and travelling hundreds of miles around the beautiful countryside of North Wales, and the great cities of England, in the footsteps of the 16th century Linguistic Reformed Scholar has been an intriguing adventure.

The documentary will be released in the future. Keep posted!