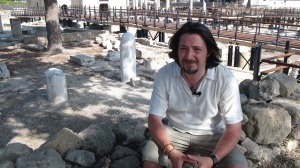 Local legend at Paphos lays claim to a Column known as St Paul’s Pillar upon which it is said that Paul was tied and given the forty lashes minus one by the Jews, in other words he was scourged with 39 lashes, according to the Judaic system.
There is no actual historical evidence for this claim and it is one of those historical legends which could be true, or could be false. However, we do have a reference to Paul being beaten and given the forty lashes minus one for a total of 5 times, according to the composition date of that letter which is believed to have been written sometime around 53-57 AD we could conclude that Paul is referring to this event and since Acts of the Apostles which concludes around the year AD 60 and was most likely written around 60-61 AD, mentions not the events written in 2 Corinthians 11: 24 in AD 53-57, we can conclude that the book of Acts does not contain everything that happened during this period but contains a brief or record of important events that took place. Thus, it is possible that the events Paul writes about 2 Corinthians 11: 24 may include the scourging event at Paphos?

However, which columns or columns that Paul was tied upon, is subject to debate, if it matters, which I think it does from a historical perspective. The problem is that H V. Morton in his 1936 book “In the steps of St Paul” records that he visited Paphos and refers to this area where the Column now stands and concludes the area to be what must have been either a Roman Temple or a market place and refers to the “Two granite columns” and also “a broken Roman pillar surrounded by a whitewashed wall and covered with iron bands to prevent people from chipping off fragments as a cure for malaria. This is called St. Paul’s pillar.” (In the footsteps of St Paul. H V, Morton. Page 140.)

The point being that he adds a photograph in the book of the two larger granite columns and labels them, “St Paul’s Pillars”. I wonder if they too are also connected?

Posted by simon peter sutherland in new atheism, The influence of film on November 22, 2012

Last night for some reason, I viewed some of Derren Brown’s “fear and faith” on channel 4. Not one of the better channels on British television.

After watching a little bit, I found it of no real surprise to see him yet again manipulating undefined people with his mind games and tricks of the brain.

As is common and typical of modern atheists, I watched him play his game which begins in one area, wins over his audience, then moves towards the direction of Christianity, which if he is honest, is what his whole game is about demolishing.

Somehow, I think all his efforts are merely a support act to warm up his audience to get them ready for the headliner.

Don’t forget Mr Brown, I’ve been in showbusiness for a long time. I know the ropes!

He moves onto his predictable thought or question, “Is God the ultimate placebo”?

Its not a question on his part, since he has already concluded his answer.

However, not content with verbally inviting a man to sell his soul to the devil, via an ancient “satanic rite”, the British illusionist, mentalist and hypnotist thus attempted to emulate a “Religious conversion” with his atheist guinea pig.

He met with an atheist woman and gave her a ‘religious conversion’? If that is the right term to use?

Whatever his game was, it was certainly not a ‘religious conversion’. I say this by knowledge, history and experience that the true and accurate Christian evangelist need not use finger tapping motions or emotional games to win over a convert. He need only preach Jesus Christ and Him crucified.

It is true that many use games and tricks within so-called Christianity, but we know that there are always true and false ones in all, but the one who is faithful and relies upon the assistance of Grace need not use methods of men and workings of the devil to win people over.

He need only preach Jesus Christ, and Him crucified, under Pontius Pilate and who died, was buried and rose again on the third day.

I suppose this game he plays opens up the floodgates for the question of whether or not these people and others, inculding scientists and the media can use these games to manipulate the average human brain so much that they can even persuade a nation to believe that Darwin’s theory is actually a fact?

Let us not forget that ‘Brown and Dawkins’ are familiar with each other.

Posted by simon peter sutherland in Issues with Christianity in England today on November 21, 2012 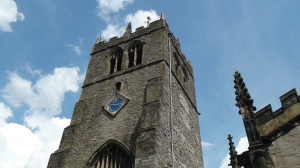 The news comes to us yet again, another topical debate once more. The Church of England has voted out the so-called “Women Bishops”

I guess there is room after all to believe that there are some Bible believing Christians still remaining within the Church of England.

But there are times when I doubt it.

Time and time again I have listened to sermons and ministers attempting to make the Biblical text fit with the idea that women can be bishops, leaders, pastors or whatever an organisation desires to call that ministry, within the body of Christ.

Not content with ‘thinking’ that the theory of evolution and Genesis can actually harmonise in some way with the Bible, many attempt to make feminism fit with the Bible also.

Does the Bible not state that Eve was “the mother of all living” Genesis 3: 20

Does the Bible not claim that God made them Adam and Eve?

Was it not Eve who was deceived?

Did Jesus not choose 12 men to be His Apostles?

Is it not written “I do not permit a woman to teach or to have authority over a man” 1 Timothy 2: 12

I fail to see why so many so-called Christians attempt to argue their way out of this and more passages in an attempt to make the church fit with the dying world? Correction, I do understand. The evidence suggests that they are little more than Darwinian fairytale believers and liberal feminists who do not believe the Bible or history but favour the sad hopeless opinions and ideas of men over the Truth of God.

I don’t know why they just don’t admit that?

Well, it seems that there may well be a few that actually do? And if they hold fast to the Truth, God will abide with them and even if the world rejects them, and hates them, what of it.

The Gospel cannot be denied for the word of man.

The Apostles at Paphos ~ New Documentary ~ 2012