Posted by simon peter sutherland in 500th Anniversaries, Documentaries, The influence of film, The Welsh Bible on June 6, 2020

After many years of difficult and complex filming, production and research, WILLIAM SALESBURY The man from Llansannan will be broadcast tonight (06 June) on Revelation TV @ 18:30 UK time.

The film is completely uncommercial and is my contribution to the 500th anniversary of the birth of William Salesbury. I am hoping to continually promote this important Welsh history for as long as I can.

This documentary is grassroots and it is up to the people to continually help promote this history and this story. This documentary has been the most difficult production I have made to this day. My hope, for Wales, is that her people return to the Bible once again and may the glory of our Lord Jesus Christ fill the country with the salvation of souls.

The Bible Society have digitised William Salesbury’s 1567 New Testament and you can download your free eBook here.

No William Salesbury, no Mary Jones.

Thank you to revelation tv for broadcasting this film.

What has the Reformation given us?

On the evening of the anniversary of the Reformation, I attended an exhibition, debate and discussion at John Rylands Library.

The night began appropriately with the printing of indulgences (on an antique printing press) accompanied with music and an exhibition of artefacts and books from the reformation era. These artefacts included original handwritten and printed indulgences. A Tyndale New Testament and The practice of prelates and Luther on Galatians.

A summery toward the end of the evening focused upon what the reformation has given us today. Where would our world be if not for the Reformation?

This question is a good one and one that could possibly provide a never ending list. However, I have listed a few of the things I think are the direct results the Reformation has given the people of Britain and things inspired by the Reformation and the Theology and principles. These are things that we can be thankful for;

During our celebration of the 500th anniversary of the Reformation, #Reformation500, it is good to remember the events from a number of perspectives.

It is easy to look at the Reformation as one singular event and neglect the series of happenings throughout Europe.

The ancient city of Geneva was a place uniquely driven by the reforms and ideas of John Calvin and his major contributions to the Reformation took place in Geneva between the years 1541-1549.

By 1541 Geneva was undergoing a political and religious war, and some sought peace by wanting to return to Roman Catholicism. But Calvin was strong enough to hold onto his conviction that all things, be they religious or civil, should be done according to the Bible.

Some of the controversial reforms the Genevan council of 60 implemented was the closing of taverns. A 16th century tavern, being a place where locals and travellers drank alcohol and eat food. Calvin had them replaced with Cafe’s where people would pray before every meal, and the Bible was always present. People were not permitted to sing in them either.

But the plan failed and it drove people away, so the taverns were reopened.

William Tyndale: The man who kick started the English Reformation

In 1523, a man named William Tyndale visited the city of London to gain permission to translate the Greek New Testament into English. He visited a Bishop by the name of Cuthbert Tunstall and requested help, but Tyndale was rejected.

It wouldn’t be long before Tyndale self exiled out of England and headed for Europe and onto Germany.  Tyndale was a Lutheran, and there he likely met with Reformer Martin Luther who had recently published his own translation of the New Testament into German.

It was at Wittenberg, Germany where Tyndale probably began to expertly translate the New Testament, from Greek into English. By 1525 Tyndale had published his translation using the printing press at Cologne.

He did not have a licence, and his burden lay for his own people and so he was forced to smuggle the New Testament back into England by ship, along the River Thames.

By 1529 Tyndale had been publicly declared a heretic and his books publically burned outside St.Paul’s Cathedral. By 1535 a Judas by the name of Henry Phillips had befriended and betrayed Tyndale and he was captured, imprisioned, condemned, strangled and burned at the stake in 1536.

But it was not the end of Tyndale. That same year his translated work was lifted and used in the very first complete English Bible by Miles Coverdale. Likewise, the translation work was later incorporated into the Geneva Bible and eventually the King James Bible.

Some say as much as 84-90% of the King James New Testament, was the work of William Tyndale.

But it was never any man who reformed the Church, it was the Holy Spirit who brought about the change. The Lord used honest men to do it, just as He can use honest and God-fearing men today, to do His will.

Was the Reformation exclusive to Calvinism?

In only a few days now the actual 500th anniversary of the Reformation will be upon us.

31 October for me is a time that can inspire things to be straightened out. A time that inspires misconceptions to be challenged and for the voices of the people to be heard.

At this time of such a momentous anniversary, there is a common misunderstanding today that I have noticed for sometime, where popular preachers from America often associate the labelling of ‘reformed Theology’ as somewhat exclusive to Calvinism.

There are a lot of brothers in America who claim ‘reformed Theology’ is little more than Calvinism in a nutshell.

Calvinism they say, is nothing more than the pure Gospel.

These claims however are highly speculative and cannot be verified beyond doubt in the face of history and Scripture.

The facts remain that reformed theology can be divided into about four branches or positions.

The facts remain that when Luther nailed his 95 theses to the Castle Church door in Wittenberg in 1517, John Calvin was only eight years old.

Calvin was born 10 July 1509 in Noyon, France, which is nearly 600 miles from Wittenberg. When Luther stood at the Diet of Worms in 1521 and the outbreak of the Reformation spread, Calvin was an 11 year old boy who went on to study Philosophy in Paris. He went on to study and pursue a career in law and would not experience a conversion to Christ until 1533 when he was about 24 years old.

By that time Luther had already been excommunicated, translated the New Testament into German and his complete German translation of the Bible was close to being published. The following year Tyndale’s New Testament was in its final revision and the majority of key reformation books had been published and distributed.

By 1536 Calvin was working hard to reform the Church in Geneva and his publication of ‘the Institutes of the Christian Religion’ was in its 1st edition. And through his preaching and influence in Geneva, Calvin’s branch of the reformation spread throughout Geneva and the reformation reached its peak by 1545 and by influence continued on till about 1620. By 1545, many publications had been published and the majority position of the Reformation was Lutheran. Calvinism mainly taking root in France, Netherlands, and Scotland and remaining until after the counter reformation of 1648.

From the mid 16th century – the mid 17th century, Calvinism had taken root in England, Scotland, Greece, and Wales during the Puritan era, while Lutheranism held a majority throughout Europe, even making its way back to Rome itself. Thus, the simple facts remain that although Calvin’s influence had branches within the Reformation, it was probably not referred to as Calvinism until the 18th or 19th centuries, the majority of Calvinistic thought process at that time being the development and spread of the doctrines proclaimed in 1618 at the Synod of Dort and the Puritans who left England during the 17th century for America.

John Calvin’s steadfast work and devotion to the faith is to be admired and admonished, and I value his contribution to the reformation. I regard Calvin’s commentaries on Scripture among the best available. But, I am less favourable concerning the common claims that reformed theology is nothing more than Calvinism. On the contrary, the claim is little more than a fictitious propagation of this centuries favourite American Calvinist preachers, who because of their position on believers baptism, would probably have been either imprisoned or drowned by the very same people they claim to revere.

Surely it is time now for this fallacious claim to be amended!

In my previous post I wrote about an upcoming exhibition at John Rylands Library on the Reformation. The exhibition, now open, marks the 500th anniversary for a happening that would become one of the most significant events in Church history.

Yesterday I visited the exhibition for the second time.

On arrival I was faced with an original handwritten letter by Martin Luther dated 1 January 1528. Written in German, the letter is very Christ centred. It shows a man who’s life was heavily under threat, unable to save himself and looking to Christ who remains the life and justification of the those who believe and trust in Him.

A translation is available and presents a very humble and spiritual man. It is a very touching letter.

Moving through the exhibition it is clear that the representatives of Rylands have portrayed the reformation properly. There is a 1539 ‘Great Bible’ and for the most part, the exhibition Focuses on the writings, influence and controversies of the following three distinct persons;

Here is a list of some of the displayed items and books. 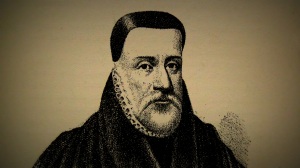 William Tyndale features prominently and there is a Tyndale New Testament, printed in Antwerp, 1536. There is a copy of ‘The Obedience of a Christian Man and how Christian rulers ought to govern’ (Antwerp, 1528)

There is also an intriguing book “The Testament of Master William Tracie esquier expounded both by William Tyndal and John Frith’ (London, 1535)

Henry V111 rightly features and there is a fine decorated copy of a ‘Defense of the seven sacraments against Martin Luther” (London, 1521) and “The confutacyon of Tyndale’s answere” by Thomas More (London, 1533)

Also on display is a fine copy of “The Bible in Englishe“, known as the Great Bible (London, 1539)

This work was the first English Bible approved of by King Henry V111 and the New Testament contains the majority of Tyndale’s translation. 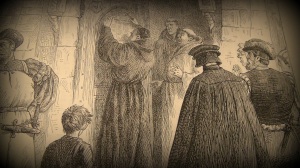 Martin Luther is very prominent with an original 15th century ‘indulgence‘ printed by Gutenberg at Mainz between 1454-1455. Luther’s reaction to this is displayed in his bold “Disputation on the power of indulgences” (Basel, 1517)

Other Luther books include ‘A treatise touching the liberty of a Christian‘ (1579 print) “On the Babylonian captivity of the Church” (Strasboug, 1520) and a Luther New Testament in German (Wittenberg, 1522) with an image of the ‘whore of Babylon‘ wearing the Pope’s Papal Tiara.