‘All Hallows’and ‘Reformation day’ in Oxford

Posted by simon peter sutherland in Christianity, Reform on November 3, 2016

This year my wife and I and our sons spent ‘all hallows’ and ‘Reformation day’ in Oxford remembering the true meaning of the so-called ‘Halloweeen’. Visiting the ancient sites associated with historic Christians such as John Wycliffe, William Tyndale, Hugh Latimer, Nicolas Ridley, Thomas Cranmer and Welsh Bible translator William Salesbury.

Oxford is one of those cities where history and the present meet together on every street. If one looks closely, stories and histories can be told on every street corner.

One of those stories which stood out to me on this trip was that of the trial of Hugh Latimer. A great reformer of the 16th century.

Latimer had studied at Cambridge and became a Bishop in the Church of England and for a time served as Chaplain to King Edward V1. However on the Coronation of bloody Mary to the throne, Latimer was brought to trial for his Biblical teachings and would eventually be condemned and burned at the stake with Nicolas Ridley, outside the city walls and Balliol College, on Broad Street where John Wycliffe had been Master.

During our time in Oxford we visited St Mary’s Church where the trial took place. As I stood in the centre of that room Latimer’s words echoed through my mind. Upon being questioned concerning his denial of Transubstantiation, Latimer declared that his memory had “plain gone” and that his teachings were true to Scripture and agreed with the Church fathers, when the Church fathers agreed with Scripture.

Concerning the Eucharist, Latimer was presented with a series of articles of which article 1 said “In the sacrament of the alter, by the virtue of God’s word pronounced by the priest, there is really present the natural body of Christ, conceived of the Virgin Mary, under the kinds of appearance of bread and wine; in like manner His blood.”

To this doctrine, Latimer replied;

“I answer that for the right celebration of the Lord’s Supper, there is none other presence of Christ required than a spiritual presence; and this presence is sufficient for a Christian man, as the presence by which we abide in Christ, and Christ abideth in us, to the obtaining of eternal life, if we persevere therein.”

Note that Latimer held to the very Biblical position that faith in Jesus Christ is ‘past, present, continuous‘ and ‘if’ we abide in Christ, Christ abides in us and by this abiding faith, we obtain eternal life, “if we persevere therein”.

For many Christians, these truth’s are nothing less than exactly what Scripture teaches. But concerning the case of Latimer, the enemies of Biblical truth were the Roman Catholic Priests and the Anabaptists. Of whom he goes on further to say; “And this I here rehearse lest some sycophant or scorner should suppose me, with the Anabaptists, to make nothing else of the sacrament but a bare and naked sign.” 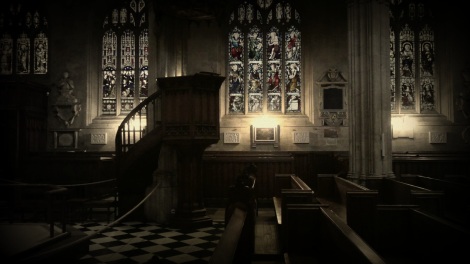 As I stood in the exact location in the Chapel where Latimer stood and the location where Cranmer made his defence, I was reminded of the cost of following Christ and being true to His Word. I know that from my own trials over the years within the Christian Church, my loyalty to Scripture has cost me the pulpit more than once.

Being loyal to Scripture is a battle from start to finish, and the Church is often the one that prevents the Christian loyalty to the Biblical text. So often it is a historic fact that the so-called Christian Church has been one of the major opponents of true Christianity. But in all this I count it all as part of the cost of knowing Christ. We lose in this life, but Christ wins. Even amidst persecution, Christ wins. After all, was it not the so-called Christian Church which persecuted the reformers? Was it not the official legal priests who insulted and accused my Lord Jesus Christ? Was it not the priests who murdered the Old Testament prophets and the New Testament Apostles? How much more then will the hypocrites continue to accuse those who obey Scripture rather than the whims, fictions and fairy tales of men.

Christians, be encouraged, stand with Latimer in the Truth and know that if you believe in the Lord Jesus Christ and abide in Him, you will never perish.

On that note Christians, I leave you with the echoing words and memory of Hugh Latimer, who, proceeding his trial, on his way to being burned at the stake, declared his salvation to men, saying thus;

“Play the man, Master Ridley; we shall this day light such a candle, by God’s grace, in England, as I trust shall never be put out.”.