Is ‘Once Saved Always Saved’ Gnostic?

In my previous article on the historic anomaly of the doctrine of ‘Once Saved Always Saved‘ I suggested the popular doctrine, as it stands today, might have its origins in Gnosticism and not Scripture or early Christianity.

For many, any such claim is unthinkable and a plain denial of Scripture. But these types of beliefs are problematic, since there are between 60-80 verses in the New Testament which give distinct warnings to believers.

Scripture repeatedly tells believers to “abide” in Christ (John 15: 4, 6, 10, 1 John 2: 28) which makes little sense if it were impossible for believers to do otherwise.

Likewise, a person cannot abide somewhere they never were in the first place.

The above verses and between 60-80 others including Romans 11: 22, Hebrews 10: 26, raise serious doubts concerning the authenticity of the doctrine.

Scripture is absolutely important and if a doctrine is not taught in Scripture, it does not belong in Christianity and no believer in any part of the world is obligated to believe it. But for all 5 point Calvinists and Calvinistic revisionists, the doctrine of ‘Once Saved Always Saved‘ is absolutely iron clad and Scripture itself. It is somewhat devilish, ignorant or evidence of a lack of faith for someone to deny or doubt it. Likewise, any attempt to cause people to re-think this, is pointless, because they have already made their minds up.

This is also the case for many evangelical’s who inconsistently embrace the doctrine, while affirming free will at the same time.  See my article on this.

There are some, who upon reading this post would probably have an attitude that says something like this; ‘I was reading this guy the other day who was trying to say that I can lose my salvation and that ‘Once Saved Always Saved’ is a Gnostic teaching…‘. They would utterly reject what I am saying without even reviewing the evidence.

Attitudes like that are extreme and immediately unreasonable and people like that are not worth reasoning with in my opinion, but they are a continuous problem.

To answer this, I am going to use six references from early Church father Irenaeus and his book ‘Against heresies‘ as my historic source. I will be reviewing the ancient Gnostic beliefs from his perspective and leaving the reader to compare them to the modern versions of ‘Once Saved Always Saved’.

I think there are some disturbing similarities between those Gnostic teachings and the modern versions of ‘Once Saved Always Saved’. I don’t see any distinct exactness between the Gnostic doctrine to proper Calvinism, but some could go to that extreme.

However, none of these references can be dismissed as Gnostic distortions of what was already taught in Scripture, because the warning passages in the New Testament, make little or no sense if ‘Once Saved Always Saved’ is true. It is an assumption to assume that because someone is saved, that they will always remain that way. A document can be saved, but that does not mean it cannot be deleted? A royal document can be sealed, but it does not mean it cannot be broken off by the King.

What is possible is that the early Gnostic’s did distort the New Testament texts used to affirm unconditional eternal security, and introduced the doctrine into Christianity by influence. 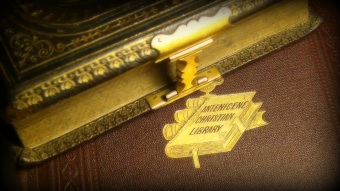 It is my opinion that too many Christians today are guilty of making far too many assumptions. We put ourselves before the Biblical texts and read ourselves into them. It has become a rare thing to enquire into the minds of the original Apostles and seek to discover what the Biblical authors were intending to communicate.

What is clear is that too many people and preachers are busy feeding particular views into the Scriptures, things which preachers have already suggested prior to their guiding the thoughts of their listeners before quoting passages from the Bible. This, I’m afraid could well be the power of suggestion, thought control, and rhetorical persuasion.

This entry was posted on January 30, 2018, 9:49 AM and is filed under Once saved always saved, Theology. You can follow any responses to this entry through RSS 2.0. You can leave a response, or trackback from your own site.