Two ancient documents and the Shroud of Turin?

Posted by simon peter sutherland in Christianity, The Shroud of Turin on April 25, 2012

Amongst the vast amount of ancient and early Christian writings from the 1st – 4th centuries, we find large amounts of forgotten books and somewhat un-researched material, all of which give us glues and further insights into the ancient mind and the times in which Jesus and the apostles lived.

Some of this knowledge and insight is hugely controversial and what is discovered is so often contrary to what is commonly called knowledge.

One document which has interested me recently is my observation within two ancient texts dating around the 2nd century AD and their referrences to the burial cloth of Christ.

One of these documents is from a text known as “The gospel according to the Hebrews“. The passage which contains a Shroud referrence reads concerning a Gospel which Origen used and records an event concerning Jesus who after His resurrection took His burial cloth to the servant of the [High] Priest, who is named in John 18: 10-11 as Malchus and referred to in Matthew 26: 51, Mark 14: 47, Luke 22: 51 as the man to whom Jesus healed his ear, after it had been cut off by Peter in Gethsemane.

According to the Gospel of the Hebrews, Jesus gave Malchus the Shroud after Jesus’ resurrection.

“But when the Lord had given the linen cloth to the servant of the priest, He went and appeared to James”
The Gospel according to the Hebrews. (Found in Jerome, Illustrious men, 2 & Lost Scriptures, Ehrman, Page 16)

Could this text be a referrence to the Shroud of Turin?

The second historical text is from what is called “The Hymn of the pearl”. This text is said to have been written by the apostle Thomas himself and is somewhat mysterious and less direct, maybe even poetical, but nevertheless, a referrence. This work is referred to in the third century Acts of Thomas and the work itself is generally agreed to date to the 2nd century AD.

The text reads as follows; 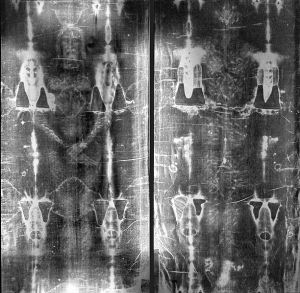 “But, when suddenly I saw my garment reflected as in a mirror, I preceived in it my whole self as well and through it I knew and saw myself. For though we originated from the one and the same we were partially divided, then again we were one, with a single form. The treasurers too who had brought the garment I saw as two beings, but there existed a single form in both, One royal symbol consisting of two halves…And the image of the King of Kings was all over it”

The question is, are these texts historical and very early referrences to the Shroud of Turin?