David Cameron puts the King James Bible back in every school in England, with intro from Michael Gove 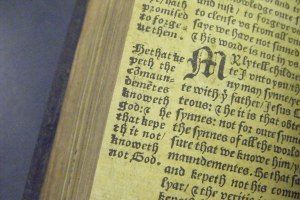 In 2011 we celebrated the 400th anniversary of the King James Bible.

Venues up and down the country displayed ancient prints of this wonderful translation of the Holy Scriptures.

Recent news declares that the government has recognized the significance of the King James Bible and has announced plans to put the King James Bible in every school in Britain, with a new intro by Education Secretary Michael Gove. This is part of the 400th anniversary.

This wonderful and right move of the government has been criticized by none-religious groups who say that David Cameron is wrong to make spending cuts yet spend large amounts of money on such a move as this? Yet has there not been a mention of donations?

Richy Thompson from the British Humanist association has said these actions from the government are “unacceptable”. However, he clearly says this for merely humanistic reasons, but Thompson is wrong, the word of God is more important than humanism and prosperity. The reason I say that is because from my perspective, humanism in its present form is temporal, but the word of God is﻿ eternal. Thus, it is not that humanism does not have value, it does, but it is temperal. Likewise, so too is proseperity, as Jesus said, “For, what is a man profited, if he shall gain the whole world, and lose his own soul“. (Matthew 16: 26. KJV)

The problem is that likewise, creationism should not be made a naughty word by evolutionists.

The reason I say this is because I believe the heart of the problem in England at present is concerning the decline in Biblical truth and the over emphasis upon evolution, which research reveals is the main stumbling block today from young people believing in God and the Bible.

Young people are told scientific opinion concerning the age of the earth and are told that evolution is no longer a theory, but is now a fact. That the Bible merely contradicts fact.

But we are rarely told that such claims are only the opinions of some scientists but not all scientists agree.

Thus, I believe the moral decline in Britain is a result of a distinct lack of Biblical truth and an over emphasis upon evolution which often leads to atheism.

Now, I know that atheists claim they live moral lives, and that may well be the case with some, but morality is not subject to individual view, for what one person sees as moral, another does not.

Anyhow, what more can we expect from unrepentant sinners?

For they inwardly desire the Word of God to be removed from education only to be regarded as mere literature and myth so our children can be brainwashed with the word of apostolic evolutionists who know enough about the human brain to know that if you tell a lie long enough and strong enough, the people will believe it.

Nevertheless, the Bible is a historical and distinctly important book, for us who are saved we know it is the very word of the living God.

Thank God that this move to put the Bible back in our schools has come at the right time.

I for one am very happy to hear about this great move by parliament and it surely is a move of God, for the Lord hears the prayers of His people and they are effectual and God will not let His word be mocked or cast aside for very long.

Man cannot take Israel out of Israel, nor can the word of God be taken out of His people.

Learn the lesson o man, the word of God is here to stay and there is nothing anyone can do about it.

This entry was posted on January 27, 2012, 4:56 PM and is filed under England issues. You can follow any responses to this entry through RSS 2.0. You can leave a response, or trackback from your own site.