Posts Tagged “No Jesus no peace”

Jesus is “Peace on earth, goodwill toward men” Christmas 2012

Posted by simon peter sutherland in Christianity, Science and evolution, The Bible on December 17, 2012

“Glory to God in the highest and on earth peace, goodwill toward men”Luke 2: 14 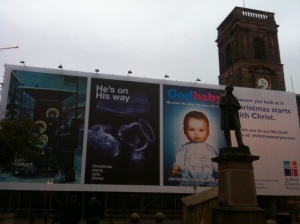 For some unknown reason to me, the so-called nativity texts of the gospels are, for the most part only explored at Christmas.

So often in England we hear the passages from Matthew and Luke read out during Christmas services, followed by traditional carols and verses from the prophet Isaiah. All very well and good but somehow I feel that much of this tradition is little more than going through the motions, a tradition rather than an understanding? A reading rather than a knowing.

It feels to me that when read in most churches in England at this time of the year, the texts of Matthew and Luke appear to lack reality and historic value. People appear to look at them as though they are just ancient myths and stories based upon some real historical events. It has become a culture to believe the Biblical narratives have been retold and edited to a persuasion by ancient spin doctors. Grand assumptions have been made by modern scholars and people have bought into it through ignorance and lack of knowledge.

The original gospels were never written to be told as fairytales or myths but actual eye witness accounts.

But still, the claims of some modern scholars dominate the minds of many. Many people seem to believe the claims, just because scholars make them.

Yet anyone who can think for themselves know that scholarship so often takes its position and defends it regardless of evidence or contrasting opinion.

I do not respectfully disagree with the many claims of modern critical scholarship which has infiltrated the church, I disagree full stop, with no respect whatsoever and I do so not without historical evidence.

Today amongst many, the knowledge of the historical reality of the gospels has become a lost goldmine of which the location is known only by the few.

I often sit within whichever church I choose to attend at Christmas listening to Christmas services, enjoying the carols and the splendour of the season, followed by a walk through the town with all its glittering lights and nativity scenes.

I am glad that the enemies of Christianity have failed in their attempts to remove the nativity scenes from our streets, even if they have corrupted much of the so-called Christian church.

But still, this year I have been pleased to see churches packed with people and an array of carol singers. I have at times, felt the Christmas spirit and the text from Luke has rung so often within my ears, “on earth peace, goodwill toward men”.

But there is no peace on earth, I say to myself. The earth is filled with horror, evil, wickedness and violence which at times is hard for the human to cope with.

This week I have read of the horrors of children murdered in a school in America. I read of wars, theft, lies, corruption, I see evil films being played on Television, filled with bloodshed and human beings slaughtering one another, treating humans like a butcher treats animals and all in the name of entertainment. I often ask the question, ‘are people stupid or what?’ do people not see that what the eyes take in, the mind conceives and what the mind conceives, the flesh gives birth to?

It is a wicked world we live in.

I see new atheists seeking to destroy Christianity with falsehood, lies, and delusions. I see corrupted sciences attempting to take God out of His creation and claiming the earth and humans are a product of chance. I hear people tell me that evolution is a fact, yet when I refute the theory I am insulted like a child by a bully in a playground. Yet in reality, the theory of evolution cannot be seen without embracing Charles Lyells “principles of geology” and philosophy that the present is key to the past. Even Darwin confessed this in chapter 9 of his famous book. It is for this very reason that modern evolutionists deny the flood, because if the flood is proven, it will disprove the theory of evolution.

I see modern evolutionists ignoring and rejecting the evidence of the ancient flood, which changed the face of the planet. I see them bombarding the media and making a culture out of believing that man evolved from ancestral creatures, so much so that people like myself who think critically and for themselves are bullied and labelled as uneducated, ignorant and deluded, just because I do not accept the word and authority of evolutionary scientists.

I hear of wars, rumours of wars, I see Israel in turmoil, I see Egypt in turmoil, I see extremist terrorist threats deep within the minds of people who are inwardly afraid. I see threat after threat and authorities seeking to silence the mouths of those who speak out openly and people cry. Tears fall down the faces of human beings throughout the world.

It is not a nice world to live in today. There is no peace. It is a wicked world. A world where a man is afraid to bring children into it.

Religion has not made this world a better place and neither has science. But for all its faults, religion has far less blood on its hands than the scientific world.

Some atheist scientists and thinkers who often attack religion, make out that science is some kind of angel or authority. Yet science is no angel.

Do I trust you science? Not me.

O indeed, the horrors of science make religion appear an amateur by comparison.

But still, the Biblical text rings clear and remains. It speaks of a pure gospel, a beauty which is not limited by the limitations of the human mind and not governed or ruled by a scientific mad age. It is a spiritual reality, a gospel of peace for those who love the Truth. A perfect saviour who in a wicked world, came down to set things right and gave His own life doing so.

A child born to die. A child, a historical human being who grew to be a man, He healed the sick, fed the poor, clothed the naked, raised the dead and took upon Himself the infirmities of us all. He did no wrong to any man, He never lied, He never sinned, He was never selfish, nor rude, He spoke only of Truth and was a doer of good works, His message was love. Yet still, the wicked hated Him, they mocked Him, they tried to trick Him, they tried to kill Him and all His people, yet still, they were unable to do so until He gave His life.

He spoke the truth to every man and woman, and those who were not of the truth, they hated Him and wanted Him dead and when that time came, they took out their hatred of God upon Him and they spat upon Him, the beat Him, the whipped Him and the set up false witnesses against Him. Not unlike the modern scholars, atheist evolutionists and critics of today. They wanted Him dead and they did it, but God had other plans.

O indeed, it is a wicked world, and when the creator is nailed to a cross by the created, we see just how wicked this world truly is. Yet God sees. God knows. God hurts.

In days of old, Genesis 6: 6 tells us that God even repented for making man. Yet He did not destroy them in the flood, but gave forth new life and He did this because man could no more cure himself of his wretched sick condition than he could cure himself of a common cold.

It is a wicked world, but if we look to the world we will not see the true meaning of Luke 2: 14, for Jesus is not of this world and He is the true meaning of the passage, “Glory to God in the highest and on earth peace, goodwill toward men”. For if we read the text in the original Greek, we see the translation should be, “on earth peace to men on whom His favour rests”.

True peace cannot be known by anyone who remains in a state of total depravity. It is those who seek the truth who find it, and it is those who love the truth and are of the truth from the beginning on whom His favour rests.

This is why there is no peace in the world, it is because those whom Christ came to save have rejected Him yet again and only those who truly know Jesus truly know peace.

As the saying goes, “no Christ, no peace” and for those who love Jesus, no evil can overcome them. As it is written in Psalm 91: 1-16

“He that dwelleth in the secret place of the most High shall abide under the shadow of the Almighty. I will say of the Lord, He is my refuge and my fortress: my God; in him will I trust. Surely he shall deliver thee from the snare of the fowler, and from the noisome pestilence. He shall cover thee with his feathers, and under his wings shalt thou trust: his truth shall be thy shield and buckler. Thou shalt not be afraid for the terror by night; nor for the arrow that flieth by day; Nor for the pestilence that walketh in darkness; nor for the destruction that wasteth at noonday. A thousand shall fall at thy side, and ten thousand at thy right hand; but it shall not come nigh thee. Only with thine eyes shalt thou behold and see the reward of the wicked. Because thou hast made the Lord, which is my refuge, even the most High, thy habitation; There shall no evil befall thee, neither shall any plague come nigh thy dwelling. For he shall give his angels charge over thee, to keep thee in all thy ways. They shall bear thee up in their hands, lest thou dash thy foot against a stone. Thou shalt tread upon the lion and adder: the young lion and the dragon shalt thou trample under feet. Because he hath set his love upon me, therefore will I deliver him: I will set him on high, because he hath known my name. He shall call upon me, and I will answer him: I will be with him in trouble; I will deliver him, and honour him. With long life will I satisfy him, and shew him my salvation.”

"“Glory to God in the highest and on earth peace, "Christmas starts with Christ", "Luke 2: 14", "Manchester art galleries", "No Jesus no peace", "Psalm 91", "St Annes church", "The horrors of science", goodwill toward men”, Jesus, Light of the world by Hunt, manchester, modern critical scholarship