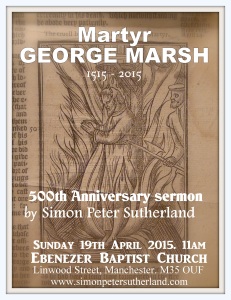 This year 2015 is the anniversary of the births of Scottish reformer John Knox, 17th century Puritan Richard Baxter and of the Protestant Reformed martyr, George Marsh.

Marsh was born in Deane, Bolton in 1515. He was a farmer by trade and married at the age of 25 and upon the death of his wife around 1548-49, he attended Cambridge during the English reformation and became Curate to Lawrence Saunders. He was hunted down during the reign of Mary Tudor and he handed himself in at Smithills hall, Bolton. He stood trial at Lathom House, and was imprisoned at Lancaster Castle and taken to Chester where he would stand trial at the Cathedral and where he was condemned a heretic and burned alive at the stake in Spittle Boughton on April 24th 1555.

As part of this, I think it is vital to the Christian Church that we always remember our own history and that we keep alive the memory of those who suffered for the testimony to the Word of God.

During the reign of Mary Tudor (1553-1558), at least 300 Protestant Christians were executed for their refusal to submit to the doctrines and demands of the Roman Catholic Church. They held the Bible in their hands and could not deny what is written in favour of the doctrines of men.

Today there are many political spin doctors within large Churches who seek to remember the reformation but move on from it. But the truth be told, we can’t. We see the likes of Rick Warren trying to persuade people to unite with Rome and look to what unites us rather than what divides us. But when its all said and done, the divide is made: The Roman Catholic Church has made the division and their views of Protestants are far more extreme than any fundamentalist Protestant could ever be.

In 1995 Pope John 11 apologised for the Roman Catholic Church’s role in burnings at the stake, yet in reality it was not his place to apologise in the 20th century for something that happened in the 16th century. Each man is responsible for his own actions, not for the deeds of others.

My aim is not to create more division between Protestants and Catholics, because as far as I am concerned, the divide is made. Anyone who believes what is written in the Bible cannot have unified fellowship with any Churches who forthright deny the Truth. We can talk together, debate together, reason together, and learn to live without harming anyone, but we cannot unite as one in Faith. On that we must stand strong.

The reformers of the 16th century knew this and they would not conform to false teaching no matter what the cost. George Marsh was one of them and he lost everything for the cause of the Gospel, even his own life.

My appeal to all Churches throughout the world who hold to the Reformed tradition, would you please consider remembering the life of the martyr and indeed all the martyrs at this vital time in our history. It is important to stress that this 500th anniversary will never occur again, so it is the responsibility of the Christian Church to remember our brethren in Christ. 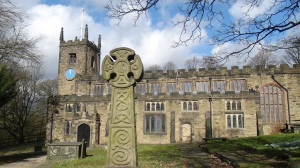 If you have access to a pulpit and your a Deacon, or Dean, Curate, Priest, Elder or Pastor and are willing to tell this story at your local Church, you can find the story of George Marsh in the Foxe’s Book of Martyrs. If you do not have a copy, you can find it online or you can find sources at Deane Church’s website or if you wish, you can watch a documentary I produced on Marsh which is available free on YouTube

I will also be giving a sermon on the life of George Marsh on Sunday 19th April 2015 at Ebenezer Baptist Church, Manchester. All welcome.