Genesis 1: 27 and the new wave of gender-inclusive Bible translations 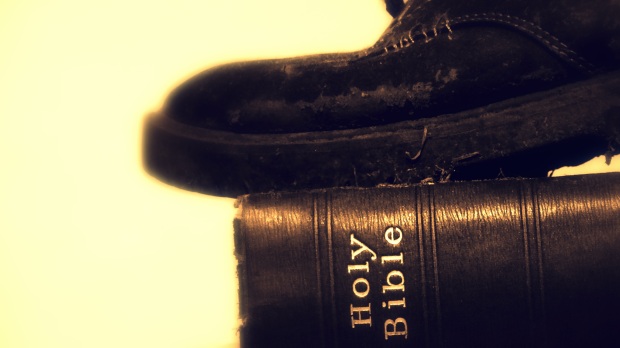 On November 10th 2011 I attended a lecture at Manchester Cathedral During this lecture John Parry made mention of gender-inclusive translations of the Bible and how he supports this idea.

This is not a new idea or a ‘new thing’ or exclusive to Mr Parry and his teachings, for many Christians today support new translations of the Bible which are re-worded to fit with gender-inclusive language.

However, for those who do not know what gender-inclusive language is within a Biblical translation context, it reveals itself as a modern scholarship idea created through the root of feminism and employed by some theologians and so-called Christians who seek to appeal to the modern world by arguing that God is neither male nor female?

I marvel that anyone can make this claim and believe in the God of the Bible. Yet, today there are a number of translations which have employed this use of language and no doubt many more will come. Concerning this issue, I see no need to move into a review or exploration of the many arguments which are used to support gender-inclusive language for Bible translations, for, it is an accepted Christian truth that the Bible is the Word of God, therefore, let us go to the Bible first and see if gender-inclusive language would translate the Bible correctly? Firstly, there is not a single passage in the Bible which claims that God is neither male nor female. If God were neither male nor female, He would therefore be sexless and the entire Bible and its revelation of God would be fundamentally different. He absolutely reveals Himself in scripture in a masculine context.

Genesis 1 contains the Biblical account of Gods creation of the universe and of the life of man and beast. Verse 27 of that chapter says this, “So God created man in his own image, in the image of God created He him; male and female created He them.” (KJV)

The New King James version translates this text a little clearer and reads as follows: “So God created man in His own image, in the image of God He created him, male and female He created them”. This text presents a clear case and absolute confirmation that the creation of Adam and the creation of Eve were not one and the same event. There were two events and not one single event and the text shows this.

I would further argue that Genesis 2 acts as a kind of commentary or expounding of Genesis 1. I say this for a reason. Genesis 2: 7 reads as follows; “And the LORD God formed man of the dust of the ground, and breathed into his nostrils the breath of life; and man became a living soul.”

Paul affirms this in 1 Timothy 2: 12-13 in his argument against female teachers within the Body of Christ and what could be seen as Paul writing against feminism? Paul says thus; “I do not permit a woman to teach, or to have authority over the man, but to be in silence.” Paul continues with this theme and gives his reason from out of the scriptures; “For Adam was first formed, then Eve.”

He then goes on to argue that “And Adam was not deceived, but the woman being deceived was in the transgression.” (1 Timothy 2: 14) Paul is clearly writing within an ancient context and also warning future generations that the modern feminist movement is directly in line with what happened back in Eden, that because of woman, men are denying Gods word in favour of the deception of satan.

Further evidence that God created woman after Adam can be found in Genesis 2:18. The text reads as follows; “And the LORD God said, It is not good that the man should be alone; I will make ‘him’ an help meet for ‘him”. This text confirms that the Genesis account is claiming that Adam was formed first.

Genesis 2:21-22 likewise reads; “And the LORD God caused a deep sleep to fall upon Adam, and he slept: and he took one of his ribs, and closed up the flesh instead thereof; And the rib, which the LORD God had taken from man, made he a woman, and brought her unto the man.”

The Bible is very clear that God created Adam first and Eve was created from Adam, no one can rightly argue against the fact that the Bible makes this claim and if any so-called Christian chooses to ignore this or hate that fact that both I and the Bible do say this, then I fail to see why you would call yourself a Christian, since you clearly do not believe what the Bible says?

Now a person could argue that God does not have gender, yet this claim also would be very weak and not in line with the entire Biblical text. God has always revealed Himself male, this can be consistently seen in throughout the Old and New Testaments. God appeared to Abraham as a male (Genesis 18) He appeared to Moses in a masculine way (Exodus 3) He is consistently named in scripture as “He”. Search the scriptures for yourself and see if it is not so?

Likewise, I would also point out a very Christian fundamental truth. That truth would be found in the birth, life, death and resurrection of Jesus Himself, who was born of a virgin, conceived by the Holy Spirit and live as a man and died as a man. If God is neither male nor female, then how do we account for Mary’s conception?

How do we account for Christ being a man? Is He is not the very image of God? Was He not conceived in a masculine way? How then can anyone argue that God is not male?

The answer my friend, is blowing in the wind, and I would plead with the church as did Paul when he warned us not to not be blown this way or that because of changing winds of doctrine, (Ephesians 4: 14).

I leave you once again with the text of Genesis 1: 27, “So God created man in his own image, in the image of God created He him; male and female created He them.” KJV

I ask every individual believer and Christian alike who reads this article, to look to Christ my brethren, bind yourself to Him and He will show you more clearly than I can, that He is who He is (Exodus 3: 14).

I would further add and plead with the Body of Christ that you must not deny the Word of God and forsake His testimony in favour of men and modern winds and an ever changing world. Be faithful to Him and His word and know His love and blessing which are given to those who love Him and keep His word (Exodus 20: 5-6) lest you make God angry and find yourself cast out of His garden and left to wonder through the world.