Posted by simon peter sutherland in new atheism, Science and evolution on June 30, 2014 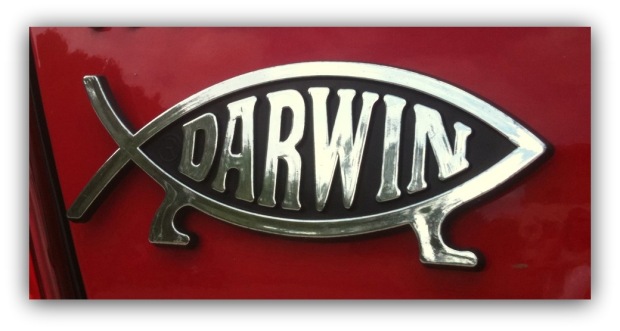 Recently I was in a certain place looking at a certain parked car, it was red and quite bright. On the boot I noticed a sign, it read “Darwin”.

The name itself was encased within a fish, a long established historical Christian symbol.

Usually, the name of our Lord “Jesus” can be found within the centre of the symbol, but this chunk of folly is clear demonstration of how Darwin is being used as a weapon against Him and His people.

But it is a pretty blunt weapon, I might add.

The name of Jesus is the highest name on earth. The Jesus of the four Gospels is the center of Christianity and indeed, the entire Bible. It is for this reason why the inner nature of man, does attack and misuse His name. Repeatedly I might add.

We hear Jesus’ name blasphemed all over this world, from television, on the street, and almost everywhere that people gather. Strange isn’t it, that no one hears the names of central figures in other religions used in such a way?

Jesus is a friend of sinners and Judas Iscariot is said to have been His friend. Yet Judas was a materialist and could not see the Truth, but only material things. These material signs are just one of many visual demonstrations of how Christianity is being attacked and one can buy them pretty much anywhere. The coins have been cast and the Judas’ of this world are betraying the very one who died for them, and just like Judas, they betray Him for materialism and  financial gain.

Darwin’s ideas are not a great problem to me. I understand the position he held and view much of it as theory based upon certain observable facts. I don’t think or see his ideas as compatible with Christianity or the Bible, but I acknowledge that some do not see things that way. However, Darwin’s 19th century position is one side of the coin, the modern view or interpretation of Darwin’s ideas is another side or thing altogether, it is extreme to say the least. One could wonder if they are even of the same coin? The political and so-called ‘scientific’ movement which is certainly using Darwin’s ideas to push religion out of the state, is one, I think, that was established some time ago with distinct design and manipulation toward Christianity. Moses was indeed a big problem to them and he still is.

Richard Dawkins is one of the 20th and possibly 21st centuries most popular spokespersons of evolution theory and  probably the person on whom the dice has fallen. But there are other people beside him, many more are attempting to arise. Thus, there is a great deal more going on with all of this evolutionary science than meets the eye.

The “Darwin” fish sticker is somewhat extreme in my view. It is immature, disrespectful and directed at Christianity. Which when it is all said and done, shows how deluded the ‘Theistic evolutionists’ really are. By embracing evolution as compatible with the Bible, is not embracing God’s way of doing things, but an opposite system.

So, Atheist readers, permit me to close with a little rhetorical offering, for your worldview is fine with me, just as long as you don’t bore me with you fairy tales. If you want to deny the Truth of why we are here and why we were born, then so be it. If you are content to have Darwin as your savior, the deliverer who has redeemed you from religion and set you free and taken you further away from the promise land and into the world of sin. Well, alright for you, “each to their own” as they say. But I tell you this; Darwin is not my savior, nor my prophet and Origin of Species is not my Bible. My Bible is the Word of God and my Lord and Savior is Jesus Christ and He has redeemed me from the law of sin and death and has given me and all His people, eternal life.

As for me fellow humans, I know that God will win in the end and I will follow Jesus. For as John Newton once said; “I’m a great sinner and Christ is a great Savior“.