Which Greek or King James New Testaments are you reading? 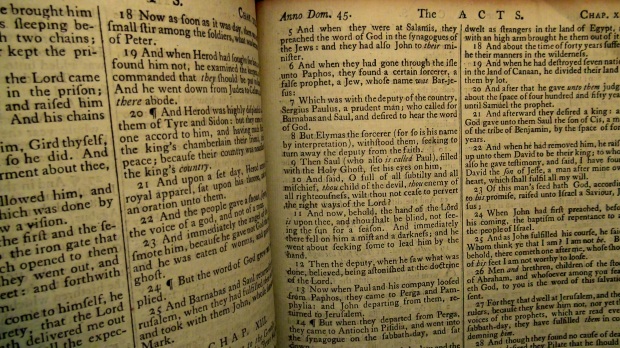 Many people today can go into a bookshop and buy a Greek New Testament. Many Christians or scholars do this and no doubt many consider that they now own the New Testament in the ‘original Greek’. However, this may be a misunderstanding.

Contrary to what many believe or are told, the translators of the King James Bible did not exclusively use the ‘Textus Receptus’ by Erasmus. Research reveals that in many passages the King James Bible translators preferred the textual renderings of Stephanus’ 1550 Greek New Testament, and also Theodore Beza’s 1556 Latin New Testament. They also consulted the Latin Vulgate.

Research into many original prints of the KJV between 1611-1762 reveal a number of printing errors including the popular ‘Adultery Bible’ and the ‘Vinegar Bible’ yet it should also be noted that there are other Bibles too which also contain less harmful printing errors. Some of these errors can be found in ancient copies of the Geneva Bible and the King James Bible, some of them involving page numbers and scriptures written underneath engravings.

Perhaps more than that, there were some who disagreed entirely with the way the KJV translators rendered certain passages. One of the main 18th century revisions of the KJV was by Cambridge Bible scholar Dr. Francis Sawyer Parris (1707-1760), who’s work was included in the 1762 KJ revision based upon years of his work. In 1769 a revision was published which incorporated much of Paris’ work. His work remains in most King James Bible translations published today.

Note the removal of the comma after “God” and before “and our Saviour”, which I think puts more emphasis upon the Godhead and Deity of Jesus Christ.

With that line of thought in mind, many people are not actually reading the original 1611 King James Verse. However, here are some further following texts which may help identify which KJV a person is reading:

Fair enough, the revisions made in the 17th -18th centuries do not appear to alter doctrine, but they were revisions none-the-less. And the 1769 revision arguably enhances the proclamation of the Deity of Jesus, and the doctrine of the Godhead (Trinity).

Likewise it is not only so with the KJV but revisions also took place with publications of various Greek New Testaments. These revisions include the Textus Receptus and Stephanus and even the Latin Vulgate.

Today, if a person were to purchase a 19th century print of the Greek New Testament by Stephanus, it is likely that they would be getting a re-worked version of Stephanus’s 1551 NT which had been updated and altered by a man named John Mill. This is often referred to as ‘Mill’s text’.

John Mill (1645-1707) was an English Theologian and Oxford scholar who worked on the Greek New Testament based upon around 100 or so manuscripts. He also claimed to have found “30,000 discrepancies”.

Thus, it is likely that if a person has a Stephanus’ GNT according to ‘Mill’s text’ it will not be the original text of Stephanus’ 1550.

This can also be the case with the Latin Vulgate or Biblia Sacra, which is often the edition of the Vulgate published under Pope Clement V111.

The probable facts are that unless a person acquires an actual original print or facsimile of either Erasmus, Stephanus, or possible Beza, the person will not be getting the actual original desired work, but a text which has been altered, or updated in later centuries. Facsimiles or original prints are the best.

This entry was posted on September 1, 2015, 8:36 PM and is filed under Bible translation. You can follow any responses to this entry through RSS 2.0. You can leave a response, or trackback from your own site.